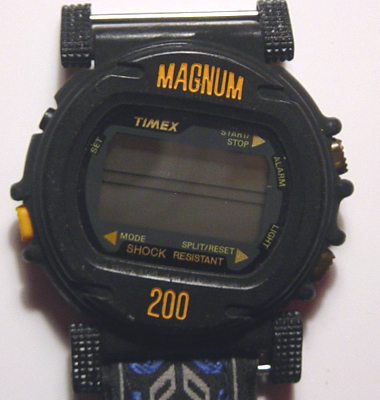 Yesterday I pulled out this watch and realized that it needed a battery and a new band. Not that I wear it but it was bought into my collection during one summer. I believe it was the early 90s. My family and friends of the family went on a short vacation trip to Virginia Beach and we went out the eat. When we left out of the restaurant I noticed a black watch on the ground. I made sure that there was no one around who might have left it. I would appreciate the same thing, because of my love for watches. We stayed around but no one came around for it, so I collected it as my own!

It actually came in at a perfect time because during the summer I would jog and run. I didn’t have a really good sports watch so it fit in just great. The band wasn’t so good so a few years later I did end up changing the band which I really still don’t like. But it serves its purpose. The watch is black with orange letters. It features two times (t1 and t2) this was one of the first times that was introduced to me. It was great.

The watch calls for a fairly large flat battery which I’ve misplaced so I’ll have to go search around for the correct size. I think the best thing to do is to retire the watch all together.